Had some time to do some load testing yesterday.

So far, so good. Am going to start bumping up the charges some more this evening tweaking them a little better.

I have been able to do some more load testing with these rounds. And I'm just going to be perfectly honest, these things are impressing the heck out of me.

It was pretty windy yesterday evening. Some pretty good gusts coming through before the rain and cold front blew in.

I was half expecting the groups to open up considerably, but they didn't. They seem to largely ignore decent gusts that would have pushed other bullets several inches away from the POA.

I'll also be making up some test loads courtesy of Lehigh Defense using their 254 gr max expansion pills that I am ecstatic to test next week.

I think instead of lining up a dozen water jugs, I think I'm going to stack two 5 gallon buckets end to end on their side in hopes that I'll be able to recover one.

I am also hoping to try out some of the speer bullets that I am currently loading, but I have put them in my lathe and made some homemade HP dum dums that I would like to see what happens when shot into the jugs too

I'm telling you guys, if you're on the fence wanting to try the 9x39 out, stop waiting. These things are really impressing me. 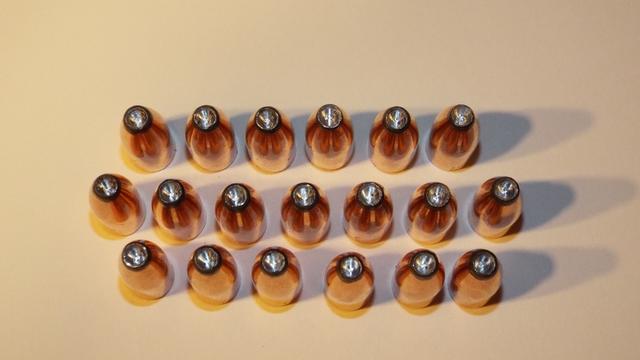 I am not surprised at all, you know what you're doing. When you stretch it out a couple hundred yards there is no reason not to have sub MOA groups with some work.

One of the things that the Blackout did for me was to rekindle my interest in single shot rifles/antique cartridges. 100 Years ago the cartridges ruling the Schuetzen game were 32-40 and 38-55, 200 yard off hand competitions. Off the bench today using the same cartridges, it takes a 10 shot 1 1/2" group to compete with the big kids.

I think that cartridge has a lot of potential fun wrapped up in it.
300 Blackout, not just for sub-sonics.
Top

I'll be honest buddy, there are still a lot of those guns that get pulled out of the closet every deer season in these parts. Their mindset is basically wanting to use the same thing great grandpa used to put food on the table.

And let's face it, that's about as big of a compliment as one could give their ancestors than to pull out an old gun that you handed down to their grandpa when he was barely big enough to take hunting.

The first rifle that I ever shot was my Great grandpa's old Marlin in 32-20. While anemic to most "modern" guns, you can't argue with seeing a big piece of fresh tenderloin you skinned out earlier that day sitting on the plate in front of you with some mashed potatoes and gravy and homemade yeast biscuit. That is living to the fullest right there mister.

In looking at the numbers of the 9x39, these big bullets even traveling at subsonic velocities, have more ft lb of energy downrange than a 357 magnum, 44 S&W, and a host of other proven calibers that put deer down every year. so, I think this one is going to become very popular very quickly.

There is one video on youtube that shows nearly 24 inches of penetration and tumbling using factory wolf ammo. You gotta admit, that's really respectable. I know it's not going to fragment at those velocities, but when a bullet that big starts tumbling around inside of something, it's like a concrete mixer flopping around inside of that chest cavity and it's going to do some damage.

I don't get to shoot much at longer range, so if it performs within 100 or 75 yards and in, it's going to probably quickly become one of my favorites.

I got finished with the load testing and workup in the 3 bullets that I have been working with.

The N310 powder is a lot slower velocity than I liked, so other than loading a few for plinking and target practice and playing around with, I'm going to stick with the Titegroup powder instead for HD and hunting.

The TG powder is more loud than the N310 powder by a considerable margin but is more quiet than the factory wolf. And a little more velocity than the wolf bullets too if comparing apples to apples.

I'm going to shorten the gas port back 1.5 inches closer to the chamber like how the Russians did on the Vintorez carbine, but that will come after deer season is over. I'm going to be using it the way it is until then.
When those totally ignorant of firearms make laws, you end up with totally ignorant firearm laws.
Top
Post Reply
25 posts