Am I going to regret selling my AAC upper?

Okay, so I did quite a bit of testing this AM at the range that is closest to me, and I was able to switch between the AAC upper and the BCM upper.

This is what I tested with;

All ammunition other than the 110 grain nosler factory handloads functioned perfectly in all configurations (both with and without my Saker attached) on both uppers with both the H1 & H2 buffers. With the JP captured buffer sometimes the bolt would not lock back with the Vortex but I don't plan on running that buffer so not a big deal.

The 110 Nosler handloads (loaded with 18 grains of H110) functioned fine w/out the suppressor but with the suppressor attached they would fail to cycle fully, causing the next cartridge in the magazine to get hung up in the chamber. They would lock the bolt back if fired as last round on a mag... so, not sure what's going on there.

More importantly, the above failure which happened with the BCM upper was reproduced on the AAC upper by swapping in the same lower, charging handle and bolt carrier. I did not have the AAC bolt carrier with me so I can't say it is impossible that it might have handled this combination okay.

At this point I'm pretty well convinced that the BCM is functionally equivalent to the AAC upper for my intended purposes... with the main challenge now being to tune my 110 handload so that it functions better suppressed.

Pretty impressed with the BCM and I think I'm going to be okay with letting the AAC upper go complete and using the funds for a different 300 BLK project at some later date.

Thanks for everyone's advice/thoughts & input.
Top

Sounds like you might have had your mind made up from the start!
Life is hard but its harder if your stupid-John Wayne
Top

However, if the BCM 300BLK upper is functionally equivalent to the AAC piece, and is hundreds of $$ cheaper to boot, then it's hard for me to justify hanging onto the AAC when I can flip it for $1K and either buy or build a comparable replacement for less.

Ultimately I might still just do a hand guard swap on the AAC upper, but based on what I saw today, that's harder to justify. The upper is worth more sold as a complete unit vs parting bits and pieces of it out so I might just let it go.
Top

I can't speak for keeping or selling the AAC but I can say I have yet to find an issue with my BCM 9" upper.

I think here you are talking high dollar apples to more appropriately priced apples. Just because it's expensive and says AAC doesn't make it any more capable. But I agree with some of the other guys. I have a hard time selling any firearm, even the ones I don't like.
Top

SwampDog_13 wrote:I can't speak for keeping or selling the AAC but I can say I have yet to find an issue with my BCM 9" upper.

I think here you are talking high dollar apples to more appropriately priced apples. Just because it's expensive and says AAC doesn't make it any more capable. But I agree with some of the other guys. I have a hard time selling any firearm, even the ones I don't like.

I sell plenty of them and hang onto plenty of them. There's a Browning Lever Rifle in the safe in 7mm Rem Mag that I would love to get rid of, but as it was a gift (a beat up barely works gift) from my father in law, getting rid of it would be a mistake.

I'm still willing to consider that the AAC might have some under the hood advantages that I just didn't discover in my limited testing... perhaps if I was forced to pick between the two for an active deployment where I would probably see action I would choose the AAC as they are the ones that developed the cartridge and platform.
Top

It's an upper, not a firearm. Sell/change/adapt it and have what you want. Don't listen to them.

Just made this for 1/3 the price of my Noveske 8.2 Low Pro upper but this is as reliable and accurate but feels much better in the hand. 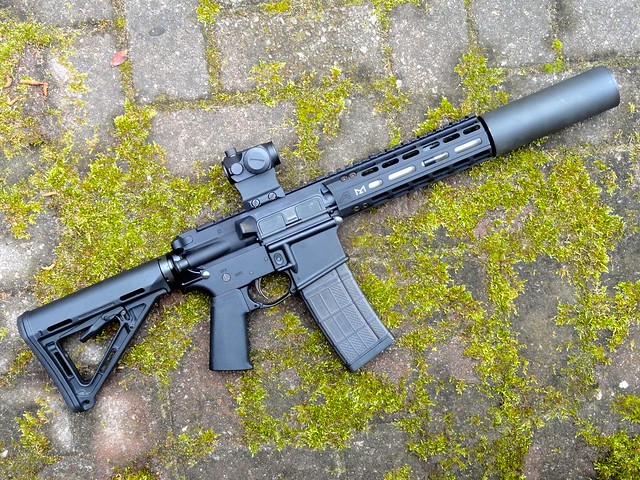 If it doesn't splatter, shatter, burst, boing or explode, it's not worth shooting.
Top

DutchV wrote:As a rule, I don't sell guns. I've regretted it enough times already.
Can you swap the handguard out yourself on the AAC upper?

That's kind of where this all started. I was only able to find one or two replacement keymod/mlok (I would prefer mlok) hand guards that would work at the 8" length of the URX 3.1. I realized that if I was goi g to go through the hassle of swapping the handguard and barrel nut it might be more financially prudent to simply sell the whole upper as a unit and use the funds to build a new upper around Noveske or Daniel Defense barrel.

Getting the URX handguard off an AAC upper can be an expensive PITA because you have to use a special (read "expensive") wrench to get the proprietary barrel nut off, and there's a chance the nut could get mangled in the process.
Top

I bought a wrench for 80.00 shipped to my door within 3 days from D. Wilson.
Very high quality and IMO better than the KAC wrench.
Or you can pay about 80-100 for a company to remove it.

Should AAC switch to the URX 4 or BCM KMR Alpha? Yes

It's 2016 and not 2010 times have changed and this design is outdated to sell on new uppers.

Is it lite for what it is if you have a lot of accessories to bolt on to the sides. if all you do is throw a flashlight on then it is very heavy and outdated even though it looks cool.

I swapped mine for a KMR Alpha on my AAC 16" MPW
I do not suggest removing it yourself if you intend on selling the handgaurd. There is a high chance of ruining the handgaurd and AAC will not warranty user error or gunsmith negligence.

That being said they look cool
Industry Pro Staff for Dynamic Research Technologies When One Shot is All You Get www.drtammo.com https://www.facebook.com/drtammo/
Join the Revolution http://youtube.com/watch?v=3_Xnx3BFuLk
Top