gds wrote:Just curious what everyone's personal prefrence of handguns are.

Me. I was a 1911 guy from almost the beginning of my gun collecting. Even though my first handgun was a Ruger P89. Which I still have and has been 100% reliable and accurate for 25 years and thousand of rounds. My next handgun was a 1911. I still have some Browning hi power copies. some revolvers and .22 semi and revolvers. Have had a taurus 24/7 .40 cal and even had a Hi point .40. Which in all honesty was a very accurate handgun. I have owned one Glock. A Gen 2 model 22 .40.

I have daily carried a Keltec P3AT. But never really liked it that much. Got rid of it after watching 2 brand new ones literally fall apart on my range.

A few years back I got a M&P 9c in a trade and was planning on selling it. But fired it before and fell in love with it. Picked up a Shield 9 and carry it pretty much every day.

Now I Have pretty much been bitten by the M&P series. All my 1911s have been retired. My wife's bedside gun turned into that 9c. I got one for my oldest daughter for her 21st birthday. It seems that every time I have a female on the range teaching them for the first time. They almost all gravitate to the m&P 9c.

Yeah I am pretty much an M&P guy now.

Carry a Shield 9mm every day. Not my favorite handgun though.
My preference go like this. All time, love to shoot,carry and use - Ruger Vaquero SA with a spring kit in 45 colt.
Style, target - 1911 (as I got older,thicker with a crappy back, I carried these less and less.)
Zombies, apocalypse, combat - Sig Sauer, preferably a 220.

My favorite has become my Sig 227, but carry a Glock 26 on a daily basis. Not a huge fan of Glocks, but, they do work.
Malinois, it's French for "Don't get one"
Top

I can get in line with the 1911 guys, it’s just too hot down here most of the year for me to comfortably carry my commander model. My go to carry that’s on my waist most days is my trusty Ruger sr9c. It’s simple, carries 10+1, and has shit’n’git with everything I’ve ever fed her. She shows her age and abuse now but if there’s one pistol I want with me it’s that one.
Top

This guy never had a chance. Couldn't even speak because I threw down on him so fast, Pilgrim! 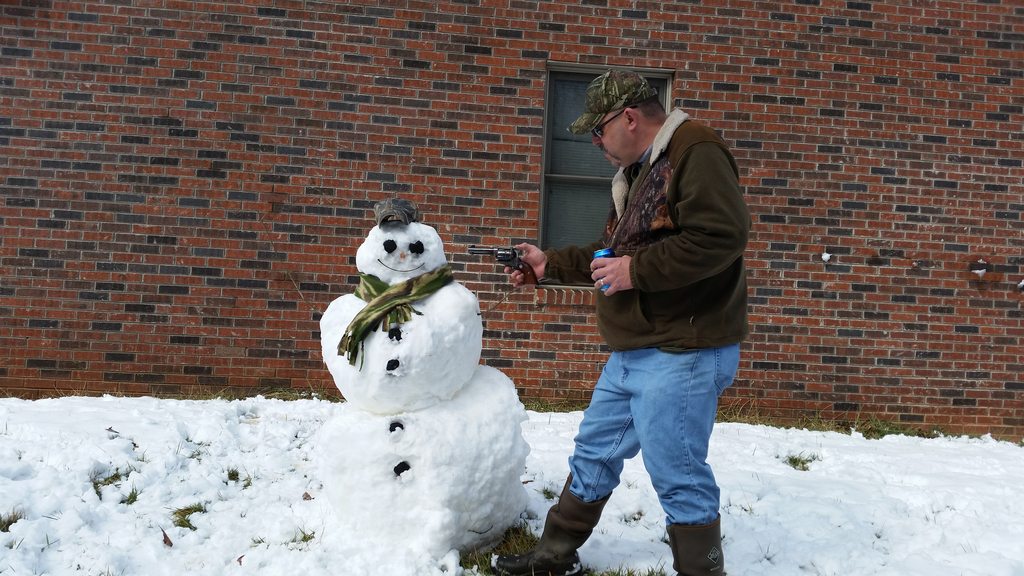 Never spilled a drop of beer either.
You can't beat the mountain, pilgrim. Mountains got its own way.
Top

I love the single actions, although I've never carried one. I traded most of mine off to fund long gun projects, mainly because I didn't really have any place to really shoot them except for the range. I have a buddy with a range at his house and we used to hold bowling pin matches there on Saturdays, and single action was one of the categories we shot, but his health has done south and we don't do those any longer. I still have a Freedom Arms .454, a Freedom Arms .44Mag, and a short barrel Super Blackhawk that I fitted with a Bisley grip and they are wonderful firearms.
Still debating on whether to keep the Freedom Arms since they are now basically safe queens. I would have traded them on long guns, but my LGS won't take them on a trade. Something about FA not having product liability insurance and in the case of an accident it would come back on him. Oh well, his store, his rules.
Bitter Gun Owner
Bitter Clinger
ArmedInfidel
Top

I suppose it would depend upon what I was doing. For EDC in an urban environment, it would have to be a Glock, either a 19 or a 43, or both if needs be. Simple, reliable, accurate.

For general woods cruising, if I had to choose only one, it would be a 4" pre 1999 S&W M686. I wear one of these almost every day when I'm working around the place. I find it a good balance of accuracy, power, and portability in an open carry situation. I also like Ruger Bisley Blackhawk's. I have a few, mostly in 5" .45 Colt, but I also have one that Hamilton Bowen made into a dual cylinder .32 from a .44 Special. One cylinder is in .32-20 and the other is in .327 Federal Magnum. Both are supremely accurate, and very handy with a 5" barrel.

I also still like my 1911's, but they find more time in the safe now than they used to, as the increased capacity and out of the box reliability of the Glock's have supplanted them for carry use.
Top

I love my 1911s and often carry the Colt Officer's Model. but my favorite carrying pistol is a CZ 82. (I currently have 4 of them) 13 shots of 9x18 in a compact package that I can carry all day without strain and shoot better than most pistols. they fit my hand perfectly (as do almost all other CZ pistols) and in an IWB holster, disappear on me. sometimes I do wish the caliber was a bit larger but when I anticipate that need, I have plenty of other higher caliber options to choose from. its just that they aren't as comfortable to carry or as easy to shoot.
peace through superior firepower
Top

M&P Shield 9 2.0. I have the Tritium night sights which really makes the gun sweet.

Threw a Houge Grip on it and am saving up for some mag extension and it will be set.

I really wanted to like the P365 as an older sig P250 was my first CC. But I do not trust them just yet as I have seen and heard too many stories.
Tyranny is defined as that which is legal for government but illegal for the citizenry - Thomas Jefferson

It is when a people forget God, that tyrants forge their chains - Patrick Henry

All my handguns are revolvers, S&W's, Ruger's, Taurus and Uberti's. I have four that I switch around as carry guns, a 4" Taurus in .357 a Uberti Schofield in .45LC and a couple Uberti bird heads in .45LC and .357. Not a big fan of semi auto handguns.

"The reason a dog has so many friends, He wags his tail instead of his tongue."

"I dont always listen to Black Sabbath but when I do, so do the neighbors."
Top
Post Reply
25 posts