Spotted this guy at first light on opening day. He was over 150 yards away and I couldn’t get a good look at him, but I knew he had potential. Saw several smaller bucks over the following days, but nothing shot worthy. Thursday morning a small 6 came out of the bottom into the field followed by another deer, both close to 175 yards. I determined the second deer was larger and deserved a closer look. They were feeding along an old fencerow and I grabbed my Primos can call and gave a series of four bleats. They both turned and headed my way. Looking through my binoculars, I saw the second deer was a shooter and I hoped he would present a shot. The buck crossed an old fencerow and came into the meadow I was set up in and stopped broadside at 126 yards. At the shot he took off and disappeared behind some trees. About 30 seconds later I heard him crash.
190 grain Maker Rex bullet at 1060 fps. The bullet entered the center of the left shoulder and exited through the right. He traveled only 40 yards. 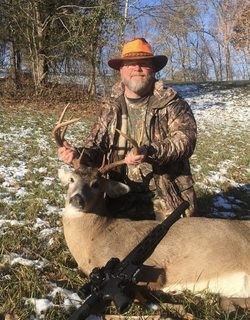 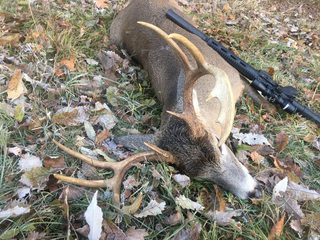 Monday morning found me set up in the same place trying to fill my doe tag. This big male coyote came in about 90 minutes after daylight offering me an 85 yard shot. 110 grain Barnes TAC-TX at 2445 fps. 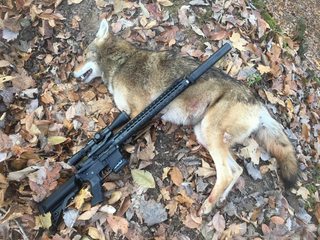 Thursday morning I moved to the back of the farm watching an open field surrounded by woods on all sides. 30 minutes after daylight this big mature doe came into the field with a smaller yearling. She was quartering hard towards me at 167 yards and the bullet entered in front of the right shoulder and exited behind the left. 110 grain Barnes TAC-TX. 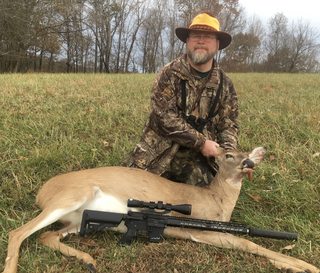 Looking good, I had yesterday afternoon to hunt, didn't see a thing, just got wet. I have worked all of modern gun season here in Ky so far. Well late muzzle loader is coming up and I still have my crossbow.

Should add, at the distances you are posting......good shooting as well!

Do you mind going into a little more detail on your loads used?

Also what type of can are you using?
Top

Thanks for posting...nice to see the real world versatility of the 300 BLK on display.
Top

All good kills, but the subsonic 126 yard shot on the buck really impressed. You've done your homework sir, and spent a lot of time on that rifle. Congrats.
You can't beat the mountain, pilgrim. Mountains got its own way.
Top

I have put over 2500 rounds through this gun in the 4-1/2 years that I've owned it. I practice regularly out to 150 yards. This is the third deer taken with subsonics with the previous long being 107 yards. I'm not trying to push the limits of the round, I just know what my limits are. Larry Rodgers has taken several hundred deer with the 300 Whisper in subsonic, many past 400 yards.
NRA Life Member
HHI # 8053
SCI Member

Nice job man! I'm excited for you and glad you've had a great season!