Got to looking around last night and it doesn't look like we've got a thread going for this years deer season results. Well here it is, a little late but there's still a lot of season left. Let's see this season kills and here the stories that go with them, blackout or not. I know we've had a few members post up thier trips already but it's always great to be able to scroll through one thread and see all the swamp, or not so swamp depending on where your at, donkeys that are freezer bound. Good luck ya'll!
Top

I am a meat hunter, and get a couple for friends now and then. Last year or the year before, TN changed the rules on bucks, and made button bucks count toward our 2 buck limit. I don't normally get button bucks on purpose but have in the past when I have mistaken them for a doe. No issue with it, even if they do count for the buck limit (it changed back this year) but they are normally not that big at that point so I normally wait until they are spikes or bigger.

Anyway, a pair of "does" came into my food plot at around 7am, looking them over I chose the bigger one and took the shot, DRT to a neck shot at about 100 yards with my .308 Rem 700 (I rotate rifles and calibers). As it turned out, she had a button buck with her, which didn't leave the area for about 10 or 15 minutes, it almost came home with me too. I noticed the other one didn't leave so I took aim but noticed a raised tuft of hair on his head so I studied it more than usual. As the downed doe was destined for the processor for a friend, I was going to take him home for me, but decided to give him a pass in case the local processors were full (happens often). She weighed in at 145lbs on the hoof, and was still lactating. As I studied the photos from my game cam, I seen where the button buck was still not fully weaned, at least up until 10 Oct. They were regular visitors along with another doe with two fawns, so hopefully I'll get a chance at the other big doe too. I have a few bucks that visit too, but mostly at night so I may not see them this year, unless the rut brings them out. 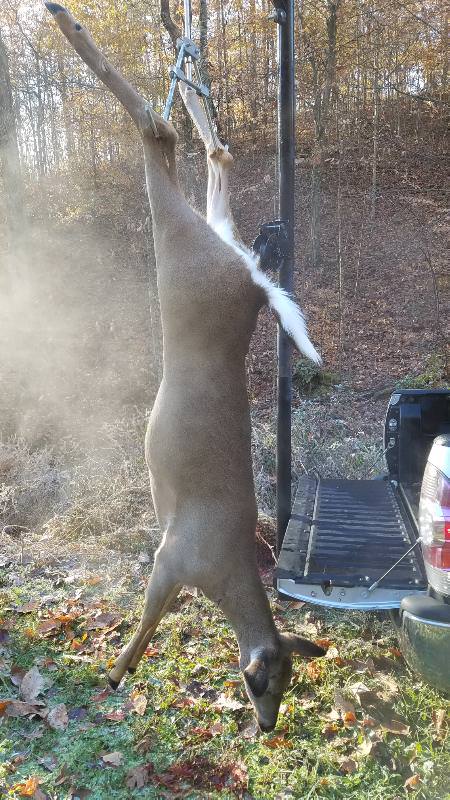 "Freedom is the sure possession of those alone who have the courage to defend it."
~Pericles~
Top

I got 2 in northern MN. buck and doe.

From what I've heard, rather quiet year for deer.. not a lot of shots. Lots of camps didn't shoot, let alone see deer.
Top

RyanMN wrote:I got 2 in northern MN. buck and doe.

From what I've heard, rather quiet year for deer.. not a lot of shots. Lots of camps didn't shoot, let alone see deer.

I read a headline which said over 49K deer were harvested which I thought a lot until I read a follow up: http://duluthnewstribune.com/sports/out ... 41-percent
"Freedom is the sure possession of those alone who have the courage to defend it."
~Pericles~
Top

we have no shortage of deer in MN, they were all just hiding. in our area we were allowed to shoot 2 this year. out of seven guys we got 3 deer. saw 5-6 deer and 1 coyote between everyone.
Top 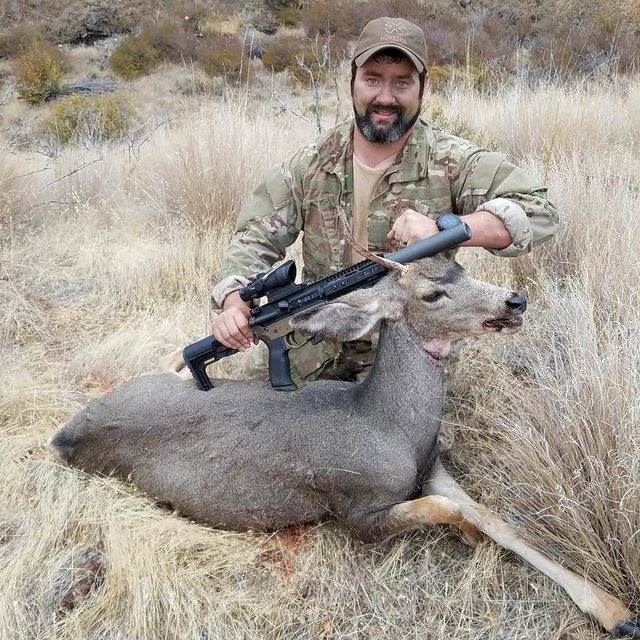 Bagged my first deer with the blackout on opening day of my first rifle season with the gun this year. It was a doe at 75 yds with 110 Barnes Reloads from a 10.5" AR. I get more hooked on the blackout every time i shoot it.
Top

do hogs count? I haven't shot a deer yet but after my Thanksgiving dinner I shot a 125 lb sow with my 300 Blk 16" AR carbine. I was walking to my stand and I saw a hog off to my left in the swamp. she was standing still and watching me about 30 yds away. I got a quick off hands shot. the 125 gr. SST hit her a little high behind the left shoulder and exited behind the ribs on the right side about 4". she ran about 30 yds and piled up. for such a high shot (but not near the spine) she died quickly. if it had been an arrow, there would have been a long track involved before recovering the pig. when I cleaned her, the bullet broke through 2 ribs and nicked the shoulder blade. turned one lung to red mush and blew about a one inch exit hole on the other side. miraculously, none of the intestines were hit! I found the bullet jacket in the hide. nicely mushroomed but the lead core kept going. I love those Hornandy 125 gr SST bullets. one shot kills are the norm! even when not placed quite right.
peace through superior firepower
Top

The deer on my small ranch all seem to work the night shift based on my game cam.
Top

Hell yea, bring on all quarry!