We have had so much rain here in Georgia since I could get back on my hog land after the deer hunters cleared out. Many days I wanted to hunt but I am past sitting in the rain all day.
Finally had a few decent days so I made the 1 1/2 hour trip. Hunted on a powerline above a feeder from about two hours before daylight till about 11:30 and saw only turkeys even though the feeder had a lot of tracks.

Took a nap, ate some lunch and went to a small tripod stand on the edge of a big creek. As I was climbing up a pig started doing some really mean sounding snorts and growls but I never could see him.
About an hour before dark I saw a black pig easing in from the direction of the creek. He was upwind of me but he got nervous and ran off. I was just getting ready to start cussing when I saw this colored pig coming in from the same area.

Head shot from a handloaded Hornady 125 SST and it fell in his tracks, twirled around a little and was done.
No hero pictures as I was all alone. Could not lift the pig so I did the gutless skin and quarter and hauled him out in a garbage bag on the ATV to a waiting chest with ice. 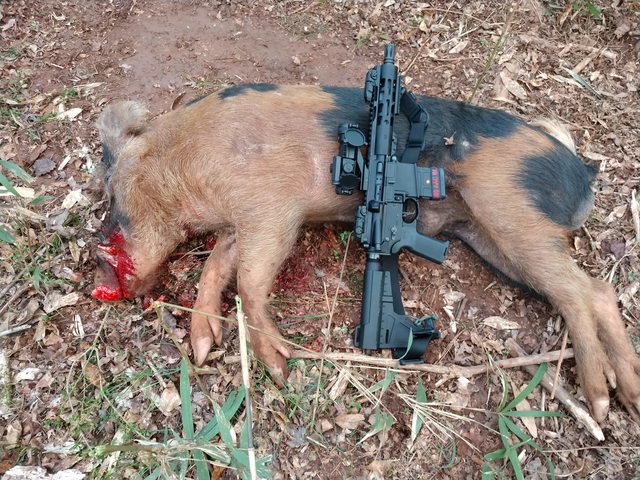 Is that a Vortex Strikefire on the pistol? what length barrel?
Congrats! Should be good eating!
Top

NICE!
Yes, I am a Baptist, and yes I carry a gun. You might think I carry a gun because I don't trust God. Well you would be wrong. I have complete faith in my Lord. It is mankind I have no trust in
Top

Nice setup, nice pig. Looks like a great hunt. I am more than a little jealous.
Top

Congrats. Nice shot and some nice pork for the grill.

Nice! That right there is party size!