Nice wright up. good information.
Yes, I am a Baptist, and yes I carry a gun. You might think I carry a gun because I don't trust God. Well you would be wrong. I have complete faith in my Lord. It is mankind I have no trust in
Top

I followed the Link. Great job on putting the info together. Thanks for taking the time to share. I hope to start reloading 300 blk very soon. I would love to copy the Barnes load as well.
Top

In talking with 2 other guys at the range who have messed with 300 BLK, all 3 of us had separately found that 110 gr VMAX/Varmageddon/Barnes with 20.0 gr H110 was the magic load.
"rjacobs" quote removed at "rjacobs" request.
Top

Nicely done, mostly duplicates some of my own experience! I have done a few similar tests with 300MP and found it to be just a bit better in ES and SD numbers. Accuracy has been pretty good. I weigh and measure necks of each piece of brass when experimenting with loads on the max side of the curve. Just one issue arises, brass life suffers when I venture into the hot zone

Excellent write up. Thank you for doing this. I have a couple of questions:

1.) What C.O.A.L did you settle on? If this is in the write up, I apologize I missed it. If you have a measurement from the base to the ogive, that would be even better.

1.) What C.O.A.L did you settle on? If this is in the write up, I apologize I missed it. If you have a measurement from the base to the ogive, that would be even better.


Aye, those two data points are in there, but probably a bit more hidden than they ought to be.

And the test rifle was a Ruger American Ranch Rifle (16.12" barrel).

I'll be loading a larger batch of the 19.7/296 load today, and will be running some of those through my DDM4 PDW (7" barrel). Although I'm already dialed in with that weapon and know within a few fps what that load will give me.
Top

Nicely done, to bad the formatting was not agreeable, lots of good info.

A couple thoughts. H110/296 are the same. The difference you are seeing in data is lot to lot variations and is something to consider when changing lots. I believe what Hodgdon did was re-label one powder as the other at some point, just like they did with 4227, but there they dropped the Hodgdon label. For me Quickload seems to match 296 better for both powders than H110.

For what it’s worth i have a couple examples of both powders sharing the same lot number and have tested side by side.

Since your on the loading bench today, you might try loads from 19.6-20.2 or 4. There is usually a very narrow window where the ES/SD number drop like a rock to single digits or low teens. Because of the small case capacity .3 grains many times will skip right over it. You might find it one one side or the other of 20.2 (I think) the load where your group rounded up nicely.

The numbers Nosler uses are some of the best out there, but confusing. Case capacity is volume after the bullet is seated and then load density with charge weight. You should be able to work that into Quickload and massage the numbers to find their empty case capacity.

My method for loading 296 Is to establish the COL with the bullet resting on the powder after a slow pour through a drop tube. With light bullets 135 grains and under, I compress the powder .010”. Above 135 I move it off the powder .010”. Keeping that ratio seem to keep the spreads predictable.

I use a .2 grain ladder for this cartridge or .15 if I get seriously and use a digital scale.
300 Blackout, not just for sub-sonics.
Top

Well, Ben B. predicted what I would find. And Dellet articulated why…

Dellet’s suggestion to run a more granular ladder series struck me as on point. And so that’s what I did. I loaded a second ladder, in 0.1 gr. increments, from 19.6 to 20.2 gr.

With seven individual loads in the series, I dropped the round count in each to three shots in order to keep the total shot count reasonable.

As with the original series, all charges were individually weighed on an RCBS Chargemaster 1500. COAL was 2.250. The test rifle was a Ruger American Ranch Rifle (RARR) with a 16.12” barrel. And the range was 50 yards. Chronograph readings were made with a LabRadar. Ammunition – though not the weather itself – was approximately 70 degrees at the time it was fired.

As before, the first group was of the Barnes factory load. Because the group from that factory load was so abysmal during the first series, I put five fouling shots – versus two in the original series - down the barrel before going to paper. Yes, I know it’s de rigueur these days not to clean one’s guns between shooting sessions – to “let the gun tell you when it needs cleaning.” I confess, though, to being old school in lots of things, and this is one of them. My guns all get put away with freshly cleaned, freshly oiled bores.

That said, some guns need a few more rounds before they settle in, therefore the five foulers.

One other minor tidbit regarding the factory load… I found it interesting that the three previous record groups all came in at just over 2300 fps, notwithstanding their poor extreme spread and standard deviation numbers. This time the muzzle velocity came in a touch higher. Thinking about it… I went and pulled the boxes. Sure enough, the first three groups were all from one lot; this last group was from a different lot. 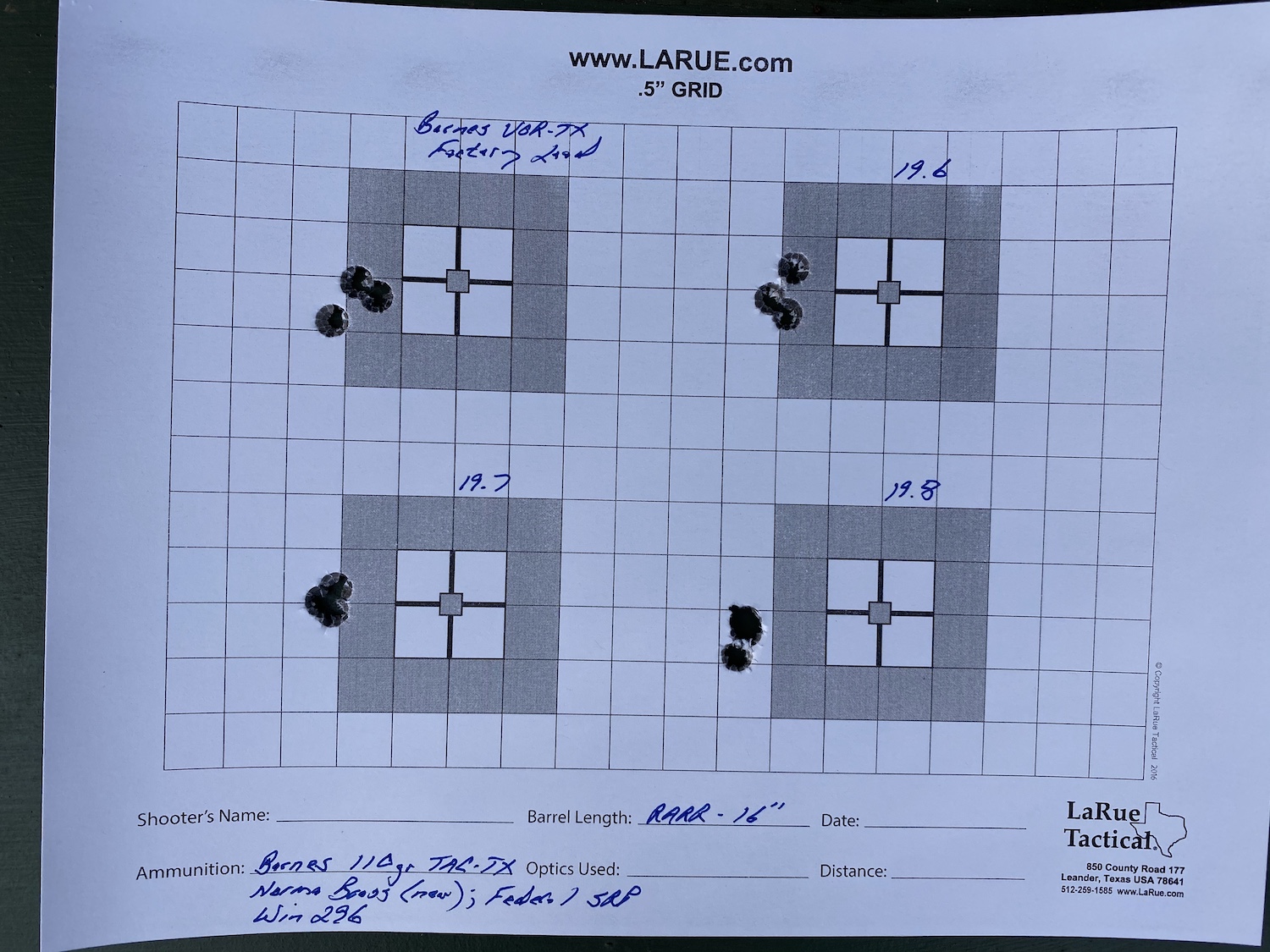 There’s a seductive compulsion to take that 3-shot group we just shot and compare it to the 5-shot effort a week ago. You have to resist that. They’re apples and oranges. Group size and extreme spread never shrink with more rounds downrange. They only ever grow. 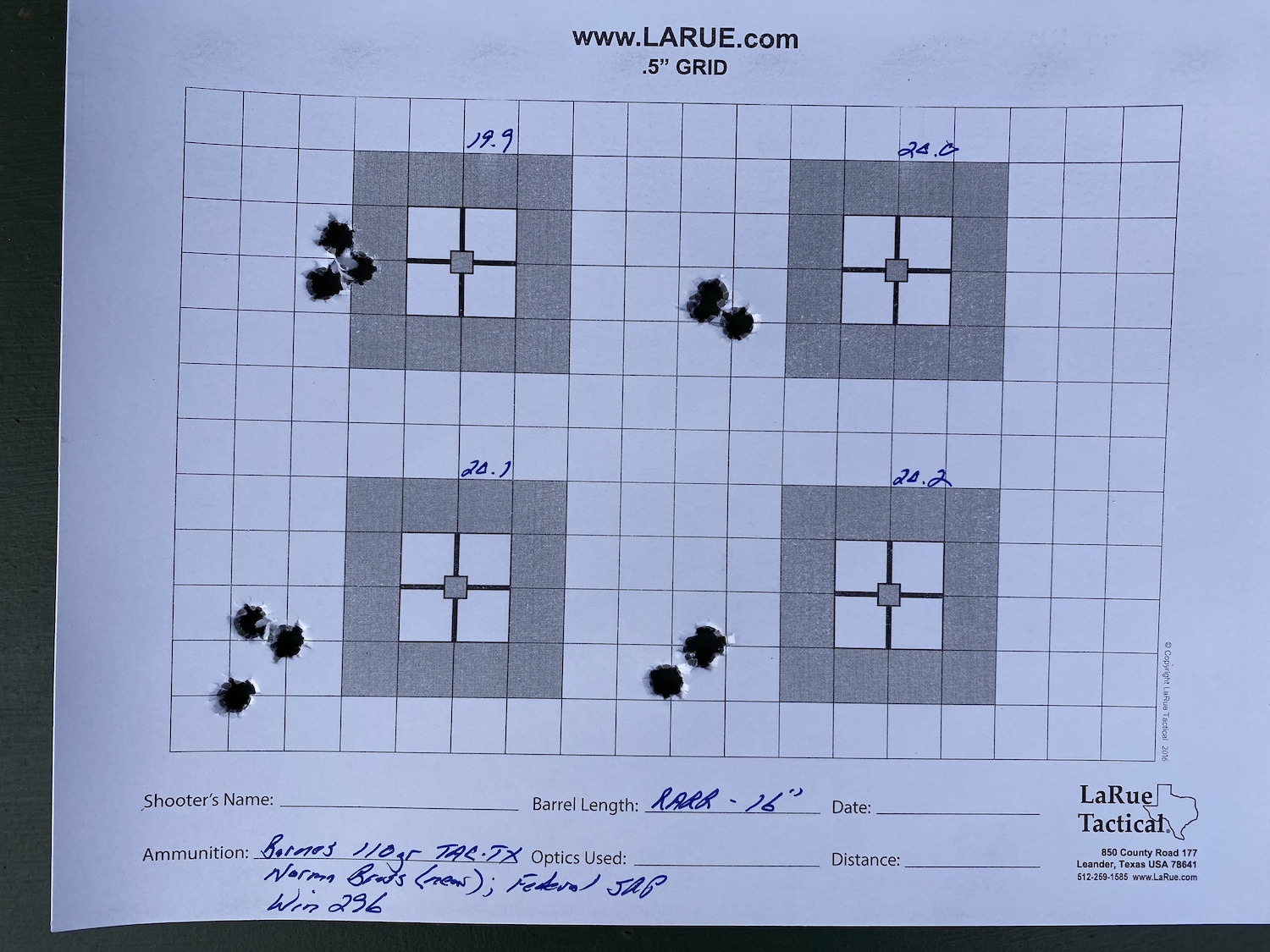 But you can still see patterns. In this case I’m actually more interested in the vertical dispersion from group to group than I am in group size. And because of that I’m already rueing a bit my early decision to shoot at 50 yards rather than 100. The information is still there at the shorter distance, but it’s a little harder to see. 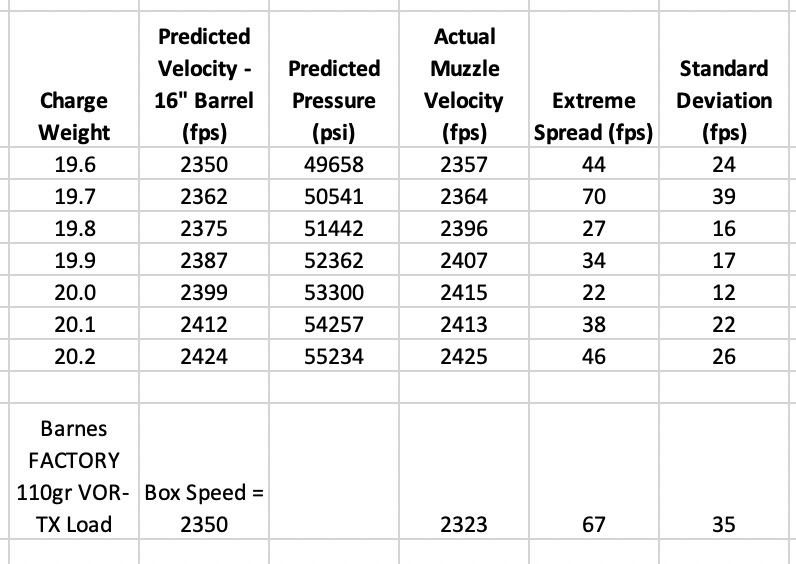 But it all comes together back inside, the rifles (I put a few rounds through my No. 1 in .45-70, as well) cleaned and put away, sitting in the easy chair in front of the wood stove, with the laptop and the chrono data.

We’re never done with the shooting, of course. The journey continues, on and on. There will be more testing, more experimenting.

Looks to me like your accuracy node is 19.7...which oddly enough has the worse "technical" numbers. Exactly why I scarcely give a crap about ES and SD numbers if I can get a repeatable accuracy node.
Top
Post Reply
41 posts