I was wanting to ask you guys a question. I have always known that some primers are hotter than others. But I was wondering something.

Recently, I was testing trying to find out what component was causing the corrosion on my barrel. In doing do, I was pulling some bullets and simply firing the primer while the muzzle was pointing directly at a piece of mild steel.

What I found out was, the wolf primer was a lot more quiet, and there was no flash at the muzzle and sounded more like a cap gun.

The Winchester primer however, sounded more like firecracker and there was noticeable flame and flash that exited the muzzle.

So, I was wondering for those suppressor nuts like myself, if anyone has sat down to test different brand primers to see if they could rank them in order from most quiet to loudest.

Since we have often discussed different ways that the whole package determines how well something suppresses or not, I think primer choice is going to be next on my list because after that little corrosion test the other day, I'm finding out that not all primers are equal.

Here is the burn marks from the two different primers. You can easily see the Winchester primer was a lot hotter when exiting the 10.5" barrel. 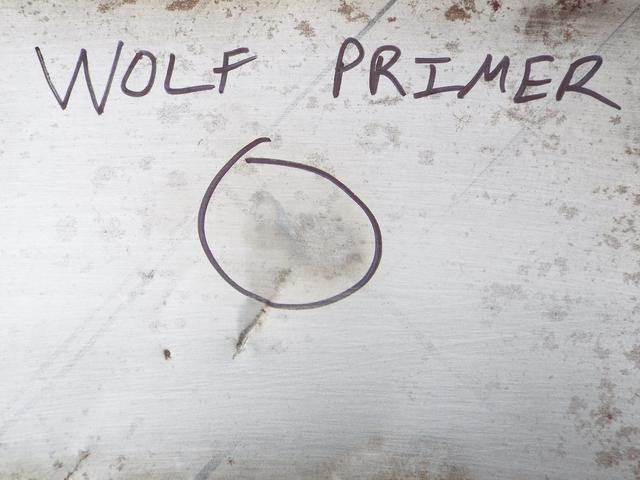 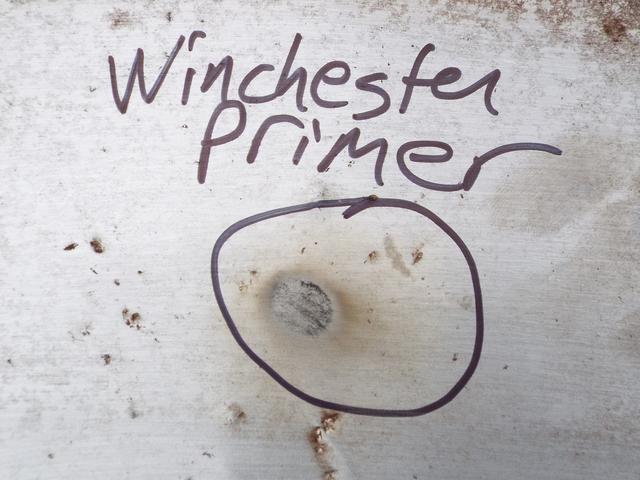 Don't know how effectively schmootz deposited on a steel plate correlates to brisance......

It has been a long time since Wolf primers have been imported.
Top

I was doing the strictly unscientific method of popping a primer with no powder or bullet in it. Simply just lighting them off while chambered in the gun and listening to how they sound.

The wolf primer was a lot more quiet than the Winchester. And I did mention that the primer was still burning when it exited the barrel.

i have to assume that dry firing a primer (no powder, etc) vs one thats behind a fully loaded cartridge are two entirely different things. i doubt theres much of anything that can be correlated between the two


2nd... i would think that a hotter primer, which provides better powder ignition, is more likely to give a quieter load than one that struggles to ignite the powder and is possibly throwing some unburnt powder into your suppressor and having a flash there as it gets exposed to more burn space.

now obliviously at the very least that 2nd statement will be as much dependent on the powder as the primer, but it stands to reason that there's probably some kind of there there.

hell i could be way off the mark on both accounts, but i dont have the equipment necessary to test it either. only a quality db meter, a reasonably quiet test area and a group of test loads would tell the real tale - if theres even one to tell thats significant anyway.
Reloading info shared is based on experiences w/ my guns. Be safe and work up your loads from published data. Web data may not be accurate/safe.
This disclaimer will self destruct in 10 seconds.
Top

I think you will find that the noise of the primer is lost in everything else. It gets muffled pretty easily.

I have shot a case loaded with powder, and no bullet, it sounds just like a squib. Less noise than the primer itself. There is a lot of debate about how far the primer pressure moves the bullet before the powder ignites, I think any noise due to primer would be finished.

How much the primer moves the bullet and what that does to start, peak and muzzle pressure, as well as powder burn rate is where it would make a difference in perceived sound I think.

What might be interesting to do, is to neck down a case one caliber or whatever you can, then fire that round with just the primer. Don’t shoot steel from a close distance, primers will send even a heavy bullet pretty fast. That might give a better idea of what the primer alone might be doing.

Fire forming cases without a bullet would be another example.
300 Blackout, not just for sub-sonics.
Top

Lots to think about.

For what it's worth, I have been getting a cycling load using titegroup, so it's pretty fast on the burn rate chart. #15 I think. Much faster than the enforcer and #9 powder that I'm using on the blackout.
When those totally ignorant of firearms make laws, you end up with totally ignorant firearm laws.
Top

For what it's worth, I have been getting a cycling load using titegroup, so it's pretty fast on the burn rate chart. #15 I think. Much faster than the enforcer and #9 powder that I'm using on the blackout.

I could not get it to work in the Blackout. Bigger case capacity and bore relieves enough peak pressure to have enough pressure at the port.

If i remember right I was peaked out around 7 grains with a 220 grain bullet. Pressure was an issue before velocity in a short barrel. What is the load for the 9X39?
300 Blackout, not just for sub-sonics.
Top

Currently, I am at 7.8 gr sitting underneath of a 254 gr; long all copper bullet. Getting about 985 fps. I really need to send you a PM concerning the bullet, but that's all that I am at liberty to say at the moment.

No pressure signs. No flat or bulging primer. Extraction is still easy with the manual bolt. (no sticky cases). Using 7.62x39 brass. Am going back this evening to try 8.1 and 8.3 gr charges. I'm hoping to get at least 1020 fps. Or, at least that's my goal line. But I don't expect to go past 8.3 regardless of what velocity that I am getting. That's about the limit of what I'm comfortable at.

It is cycling at the moment, but is not locking the bolt back. So, it's teetering right on the edge either way.

I still have about a quarter inch from the top of my powder to the bottom of the bullet inside of the case, so there is also no compression when the bullet is seated because I measured down to the top of the powder in a charged case and then measured how much of the bullet sticks down into the case.

Barrel is 10.5". Pistol length gas port. Factory gas port is .125" just like the blk that we worked on a couple of years ago. I have already turned the barrel down another 1.5" to make a micro length gas port but have not drilled the hole yet. I'm going to wait until after deer season so I have more time to work that up. I'm going to start at .090" and work my way up .005" at a time until I find the sweet spot. Or the .125" diameter max, whichever comes first. I'm expecting probably .100-.110" will probably be where it ends up though just by guessing.

I know all of this is a lot more than you asked for, but that's where I'm at. Quickload numbers are not right at all. According to them, I should be getting at least another 100 fps @ 1090 + at that charge rate and 41k+ pressures and I don't think I'm anywhere close to that.

I understand what you were talking about getting pressure before velocity in the short barrel. The n310 powder that I tried just wasn't getting them up to enough speed so I'll use it for some hot 357 loads or something else. I have abandoned that powder for this project. 930 fps with the 254 gr bullets is as much as I went with it. Though I'll be honest, for the bolt action, those are some nice suppressed gnat fart plinking loads. But I wouldn't want to use them for hunting because I prefer more velocity for that of course despite that the bullets were expanding down below 790 fps at the muzzle plus whatever it loses at 50 yards.
When those totally ignorant of firearms make laws, you end up with totally ignorant firearm laws.
Top

One thing I have found with quickload is that it can't compensate for a gas port.

I found velocity numbers to be much closer in a bolt action than an AR. I also found that loads in a 16" bolt action are about the same as my 18" AR. Then it gets all screwed up by a 12'' bolt action. You might try turning off the gas and compare.

One other thing to check is for blow by on the bullet base if you can recover one, it might not be sealing in the bore.

I dropped the ball earlier, but now that you have some data it might be easier figure some things out.
300 Blackout, not just for sub-sonics.
Top

You didn't drop the ball. Not at all. Life happens. We both know that. No way I could be upset over that.

I have been running it without the gas block. Yesterday was the first time that I fired the gun with it. The velocities are certainly much lower both ways.

I actually think the 8.3 is probably where I'm going to stop anyway regardless because I don't want to push anything. Especially my luck

I have gotten the 270 gr speer soft points to 1018 fps with 8.2 gr of titegroup. I could easily push it more if I wanted to. I have the bullets seated pretty short (and they're a short bullet in the first place, especially compared to the long lehigh bullet which takes up a lot more of the case) and I could move the speer soft points out farther and add more powder if I wanted to. But 1018fps isn't too bad. The factory bullets were averaging 1024 so I'm not too far off with them.

I'll add a picture of the target from yesterday to show what kind of accuracy that I'm getting. Granted this is just at 25 yards, but I was shooting over the chrono anyway, and just wanted to get a rough idea of what they were doing on paper.

The one in the bottom that looks like a flyer, wasn't. That was with the N310 powder and at 930 fps. Which was enough to tell me that it's just not going to get the velocity that I want. Like I said earlier, they're fine for gnat fart plinking and playing around but that's about it.

The other 2 groups that I circled were with the titegroup powder. The bottom circled group was at 965 fps avg and the top one was 985 fps avg. I only shot 2 a piece so it's not a definitive test, but was enough to make me smile when I finished and enough to let me know that I'm on the right path.

LIke I said, at 25 yards not exactly tell -tell of what it would be doing at 75 or 100 yards or more, but both printing to where they are making a ragged hole, or at least almost touching, tells me these are going to do their job so long as I do. 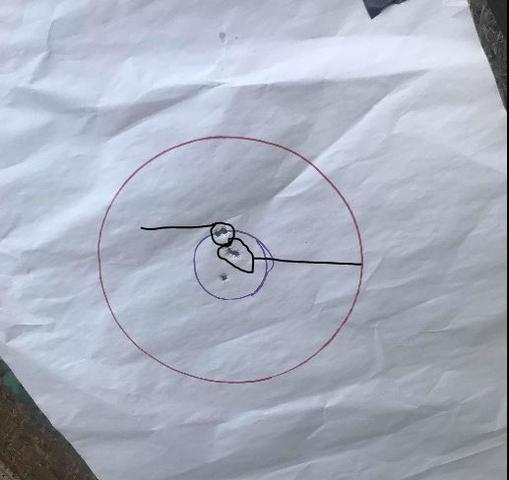