Well, I've gone out and zeroed my red dot at 50 yards now (see other post, thanks by the way!) and now I've got a white light attached to it...and it's ready to rotate into my HD closet. I've attached some pics of it's HD setup that it will be wearing most of the time. I'll be using the 110 gr BlackTips in it, and it has the Sig Sauer Romeo5 XDR (has either a single 2moa DOT or a 2moa dot with the 65moa circle around it) with MOTAC (motion activated ON and OFF so it can just stay ON all the time) and it will also be wearing my Omega.

I was in the market for a good weapon light for it and I picked up two Surefire flashlights...the P2X Fury Tactical and a P3X Fury Tactical. I figured the TLR2 wasn't quite enough light for a long gun and got a great deal on both of these lights. They both have the single lumen output and the tailcaps are momentary or clicky on. Exactly what I was looking for in weapon lights. The only difference between the two (other than the lumens...600 vs 1000) is 1 1/4" in length, and that once takes 2 CR123's and the other takes 3 CR123's. The 1000 lumen P3X, has a slightly longer run time according to the specs (2.25 hours versus 1.5 hours), but I don't know if that is full lumen output or now. Weight is negligible and with the suppressor on the light pattern will be the same also. I was going to put the larger one on my Mossberg500 but after getting it all mounted up I might like the longer one on the 300blk...plus, the 300blk has more range, so the 1000 lumens might come in handier on that rifle than on the shotgun.

Opinions? Which light would you put on the 300blk and why? And which one would look better? I attached pictures with and without the suppressor and the short one is even with the flash hider when the suppressor is off and the long one would stick out 1 1/4" inches further. It will never be fired without the suppressor on really so I don't care about soot or anything like that (I do have that issue with my primary arms flashlight on my 5.56...it wears a tactical rubber when I go to the range with it so I don't have to clean it off when I'm done...plus I know it's not going to get any STD's

). It's no biggie and I'm trying not to overthink this, but just curious what you guys would do if you had both lights and the 300blkSBR and a Mossberg500 to mount them on.
Thanks in advance!

By the way...both of these lights are freaking bright!

Edit: After posting the pics I noticed that I actually got one of my other HD weapons in the pic...my yellow lab's two front paws! 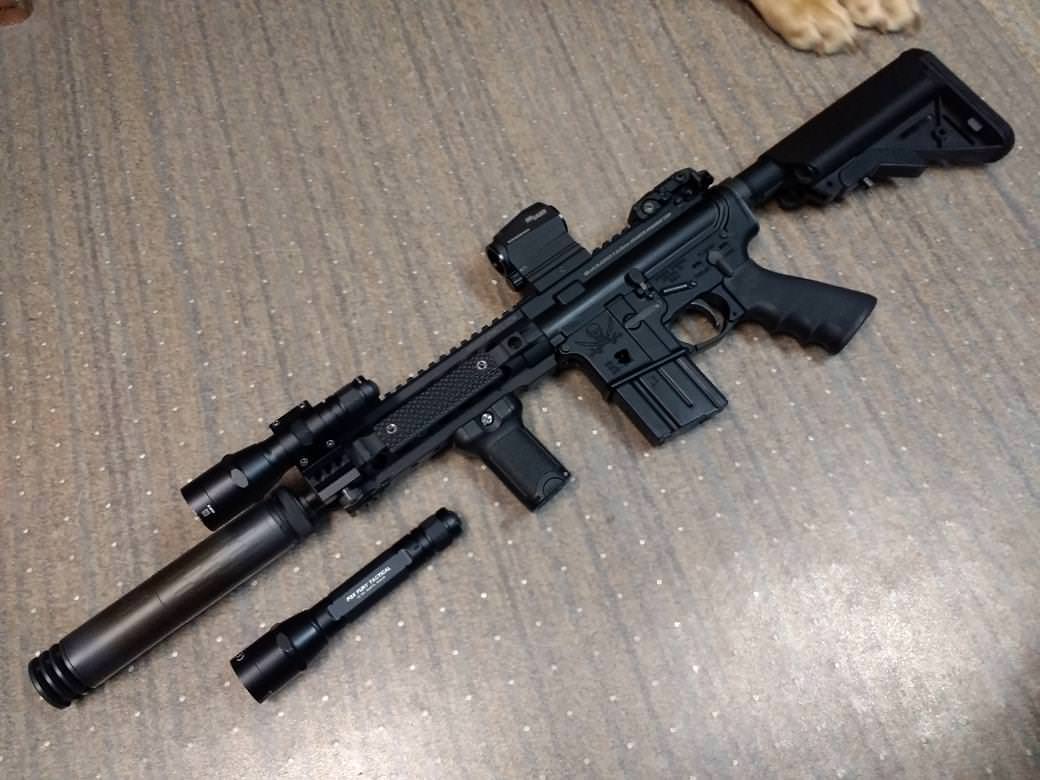 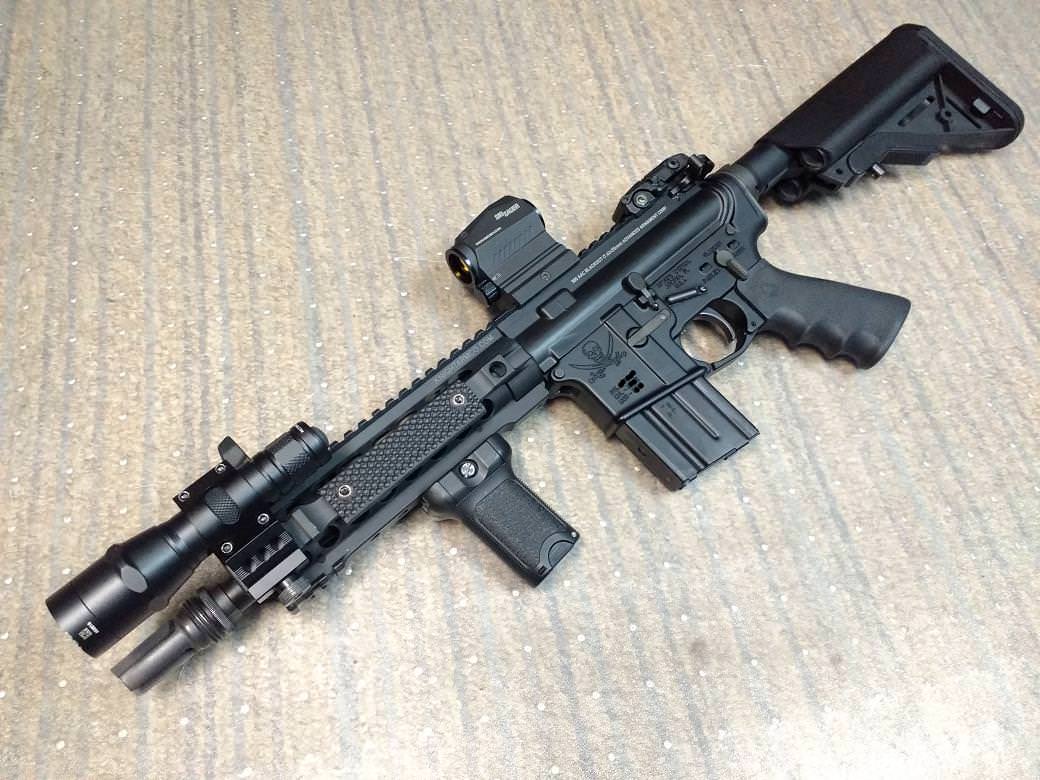 Use either. Really, you are over-thinking it. There is no perfect solution for what would be a messed up, imperfect situation.

But, here’s my opinion on your question; For HD the 600 puts out plenty of light. Still, I have never heard someone say, “Gee, this light is too bright” after a tactical situation. If you don’t mind the extra size, then use he 100 lumen light.

Perhaps more important than raw output is the beam pattern. A wider beam can flood the target area better. On the other hand, I thnk you said you might need/want to take it outside in a prior post. In this case, a tighter beam that carries farther might be appreciated.

For me, I use a Surefire X300 on my close-mid range SBR and find it a good compromise between weight, output and size. I mount it right on top at the front end of the rail to reduce the barrel/silencer shadow effect. (More accurately, it just moves the shadow to the bottom of the gun where I have already cleared, as opposed to having a shadow off to one side or on top.)

Bottom line for both the light and the red dot zero questions; choose an option and practice with it. Then practice some more. You’ll be fine.
Top

I also use a top mounted X300 on my 300 SBR. That gives me PLENTY of light for that guns usage. It allows me to ID targets out to 100yds and thats about as far as I would engage in the dark anyway. Any further and you would need to have the light on longer then im comfortable with

I also have a couple SBR’s set up with Inforce WML’s. Also a great HD light. Great beam pattern. No hot spot just a big flood

You dont need 1000 lumens in a tight beam for indoor/close range work on a rifle. As a handheld outdoor search light, sure... bring on the power. For SD/HD, the 4-600 range is just perfect.
Top

And yes...I am the master of over-thinking things!

I've got a new stock and fore end coming for the Mossberg500 (I had a speedfeed stock on it and it was just too long) and as soon as it gets here I'll put that one together with the P3X (1000 lumen light) and see how Like that one mounted on that rifle. After seeing how bright these are I may end up putting the TLR2 on the Mossberg then keeping the P3x as a handheld.

i have a streamlight protac rail mount 1 (275 lumen) and its about the perfect brightness and beam pattern for my house. i got it on my 8 inch blk pistol and its lightweight, compact, and durable. plus its got a strobe feature

DevinRPD wrote:i have a streamlight protac rail mount 1 (275 lumen) and its about the perfect brightness and beam pattern for my house. i got it on my 8 inch blk pistol and its lightweight, compact, and durable. plus its got a strobe feature

Gotta love the strobe feature. I call it “seizure mode”! It does have a nice disorientating effect.
Top

For HD, Inforce 400. No bells or whistles, but will light up a whole room from the doorway. For HD it's not lumens, it's "spill."

Not shilling for Haley, but it is what I run on my HD BLK.
Top

Never can have too much light on a gun.

Obviously go with the 1,000 lumen, as long as its beam is narrower than the other. With LEDs they tend to be more spill than throw compared to other types of emitters like HID's found on spotlights.

Truth be known you can put one together reasonably cheap on Kaidomain or Deal Extreme using a narrow beam emitter like a five XR-E's in a reflector housing drop-in (gets you 1,200 lumens of focussed light) driven by two rechargeable Li-ion's in 2-Series (7.3V). The XR-E is older and less efficient than the latest XM-L2's but has the narrowest beam of all LED emitters. The power efficiency of the emitter is a non-issue as we don't tend to have these torches on for very long. It's all about how you can focus what lumens you have.

"Obviously go with the 1,000 lumen, as long as its beam is narrower than the other"

Not at 15 or 20 feet. Home defense. Unless you live in a bowling alley, spill is good.
Top

If that big yellow HD weapon in the background is anything like the big yellow one we had, it would probably invite anyone into the house and be happy to help them carry anything they wanted out to their vehicle. The only thing scary about him was his big dog bark if you couldn't see him. Otherwise he was the tailwagging neighborhood greeter.
Top
Post Reply
14 posts